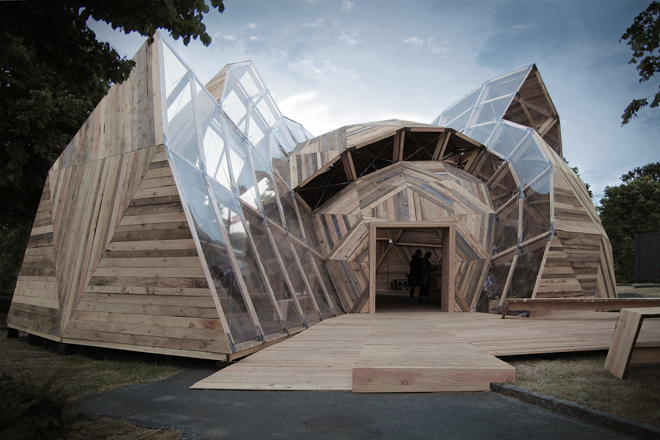 CONTEXT: BL, Denmark Public Housing participated in this year’s Peoples Meeting on Bornholm, in order to generate debate on the future of housing. According to BL a standard exhibition tent would not do justice to a debate of such importance. Instead they wanted a space that stuck out, inspired and invited inside. In addition to creating the physical space for this debate, it was important for us that the space also became an independent contribution. We wish to stick out, but in the right way. We have the ambition that architecture is to be as site-specific as possible, that architecture is influenced by the local surroundings; the view, the landscape, the wind and the sun. And the features it offers. On the drawing board was a sketch model that has been a long time underway, but had been missing the right circumstances, sentiments and audience. A model of a deconstructed ”Dome”, a construction iconized by the hippies in the 70s.

PROJECT: The geodesic dome is one of the most optimal methods of constructing that we know of. It has all the advantages of being rationally and mathematically generated, but it is sadly lacking many of the qualities we associate with good architecture. You could call it non-architecture. It sets like a spaceship that only relates to its own design, not the local surroundings. The ambition was therefore to understand the geodesic domes construction, and then deconstruct its sacred geometry, in a way where we do not oppose, but respect its properties. The deconstruction enables the dome to become an unlocked shape, but can be split up and scaled, so that the cut dome may be shaped by it´s site and features. It can form niches, crevices and corners, defining, opening and hiding. By splitting the dome, we created niches at the entrances that were oriented towards the access to the site. Inside niches that provided the framework for the various internal functions and indirect lighting. We made it consistent, that the curved surfaces were closed and that the perpendicular surfaces were transparent, which means that we dictated the light and the views by splitting the shells. This gave the effect, that the center of the room had no view to the outside. The space closed in on one until one moved out towards the niches where the functions were located. For the Peoples Meeting the dome contained a stage, placed in a niche, and the stands were in the open center of the dome, where the effect described above, created additional focus on the stage and a great sense of intimacy. We proposed a system of nodes in steel, nodes that connected with wood can build the complex lattice structure. A skeleton to cover as a tent, but also to be permanent and point towards new ways of building. The system is designed so that it is possible to vary the skeleton. It can be adapted to the given parameters, disassembled and placed in a new design, with new parameters. The column-free lattice structure allows great freedom for interior and facade design. Windows and openings can be placed freely and no interior walls need to be load bearing. The dome on Bornholm had a building envelope like a tent, but the skeleton might as well be the supporting structure in a fully insulated house.

TECHNICAL: The geodesic dome, the starting point, is a frequency four, its great circles forming the lines that are cut along in the splitting of the surface. The chipped sphere surfaces are scaled from the center of the sphere and therefore remains true to the geometry. The surfaces in between becomes radiating, perpendicular to the spheres surfaces. The ambitions of the system was honored by 3D-modelling the entire skeleton. Printed nodes that are laser cut and robot welded, meet the high precision requirements of the lattice structure. The nodes are designed as steel shoes that are open in one dimension and two inches in the other, so they can accommodate the family of standard rafters. In collaboration with our engineer we developed a table with the differend stress levels. It generates the dimensions for the timber to be used for the different struts. This dome used 2×4 inches and 2×6 inches construction timber and same size plywoodbeams, a total of four different strength classes, to minimize material consumption. The dome was set on the site with half nodes, as in all other intersections of the surface. The ring of nodes were attached to inward pointing beams, that were weighed down by 18 tons steel plates, that formed the floor and prevented the dome from lifting in strong winds. The building envelope consisted of translucent greenhouse membranes on the sphere surfaces and transparent PVC film as windows on the perpendicular surfaces. All the wood used for the facade, flooring and interior is local grown Douglas pine. Because the project was temporary, the façade was made of old boards that could be only difficultly used for other purposes. 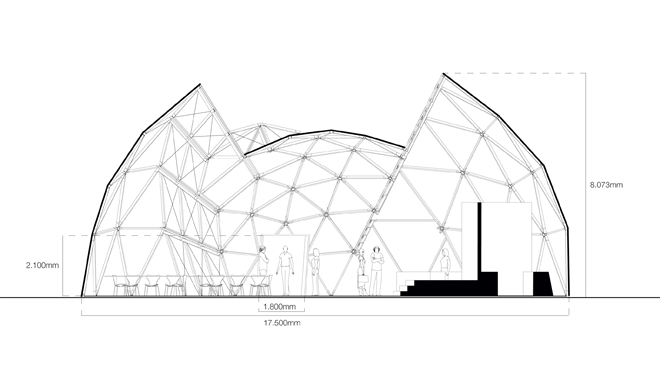 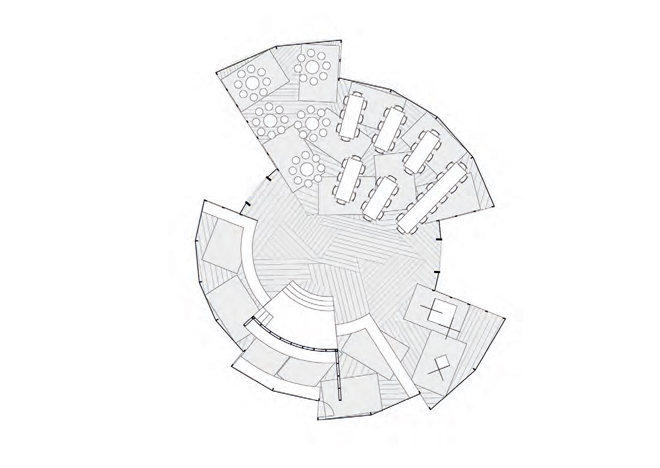 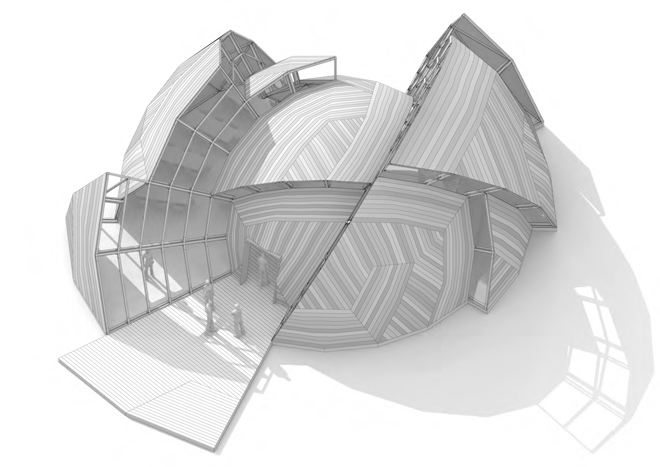 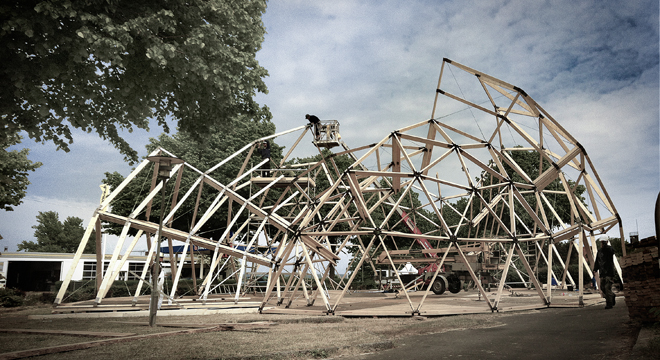 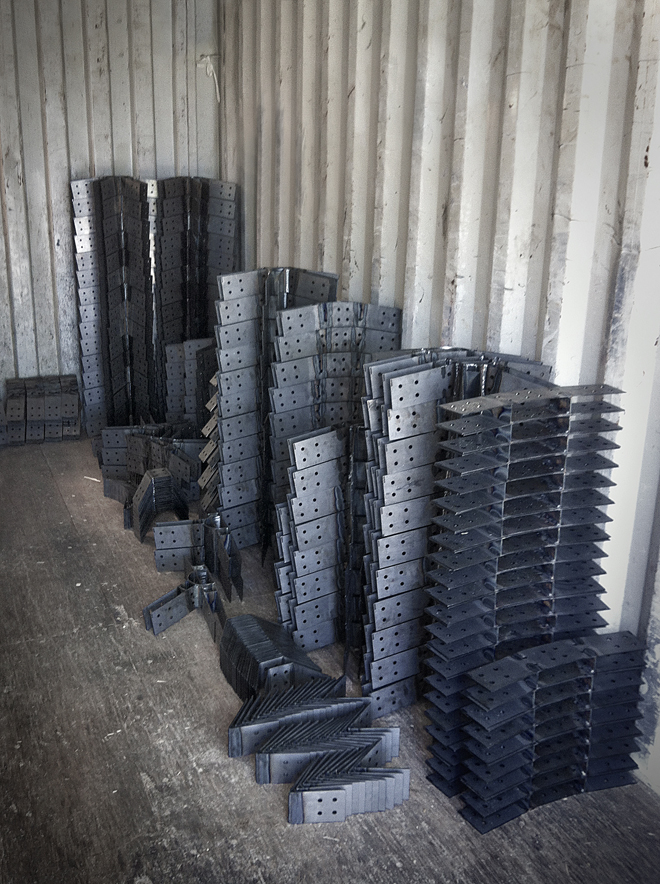 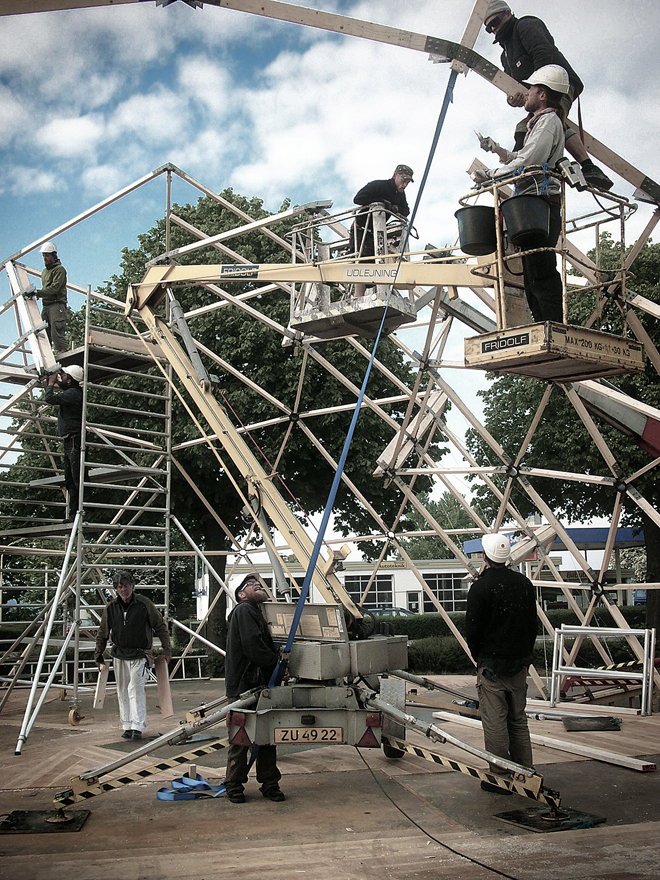 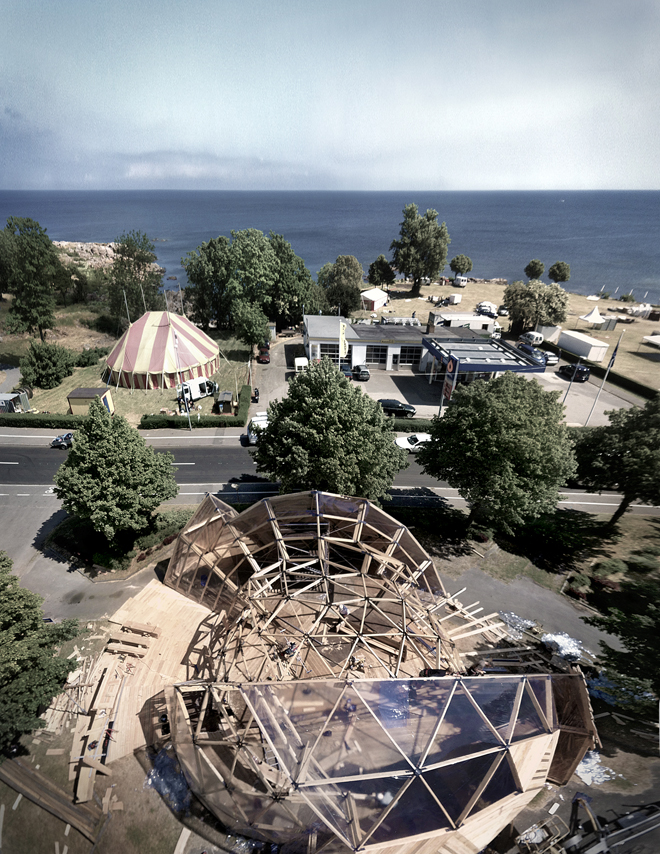 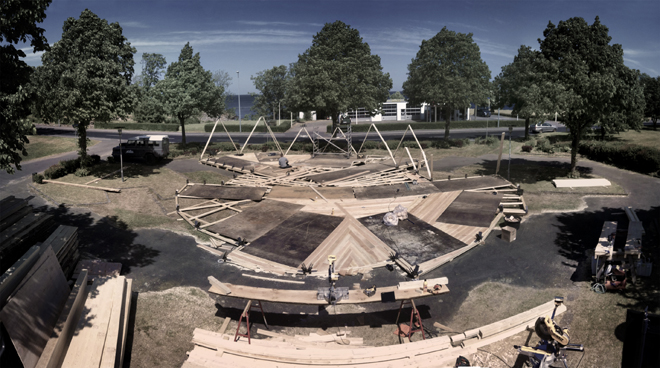 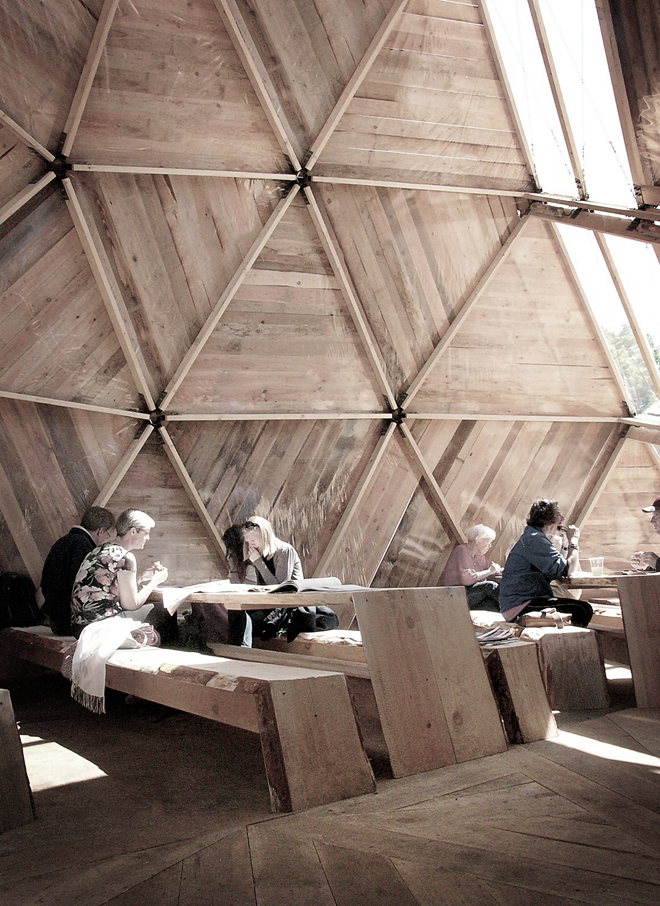 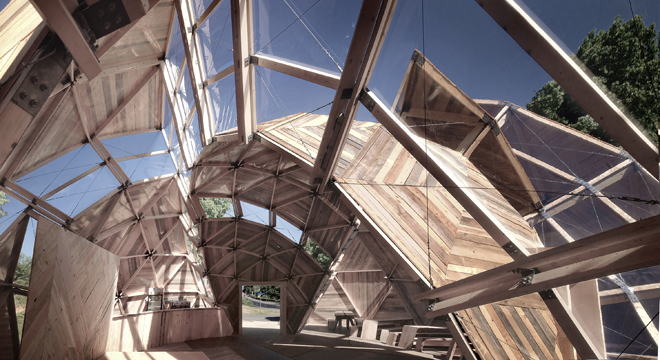 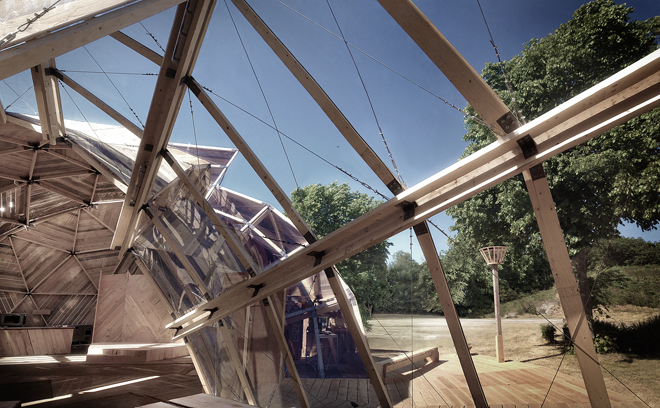 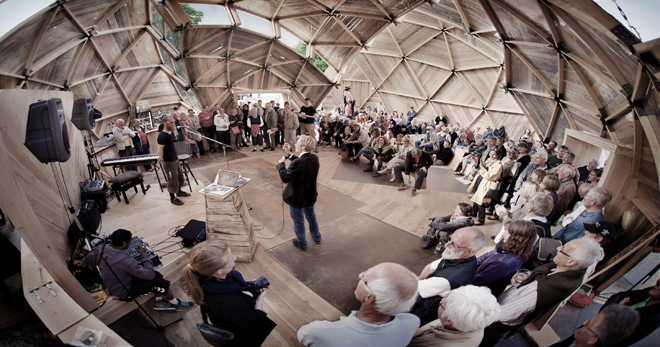 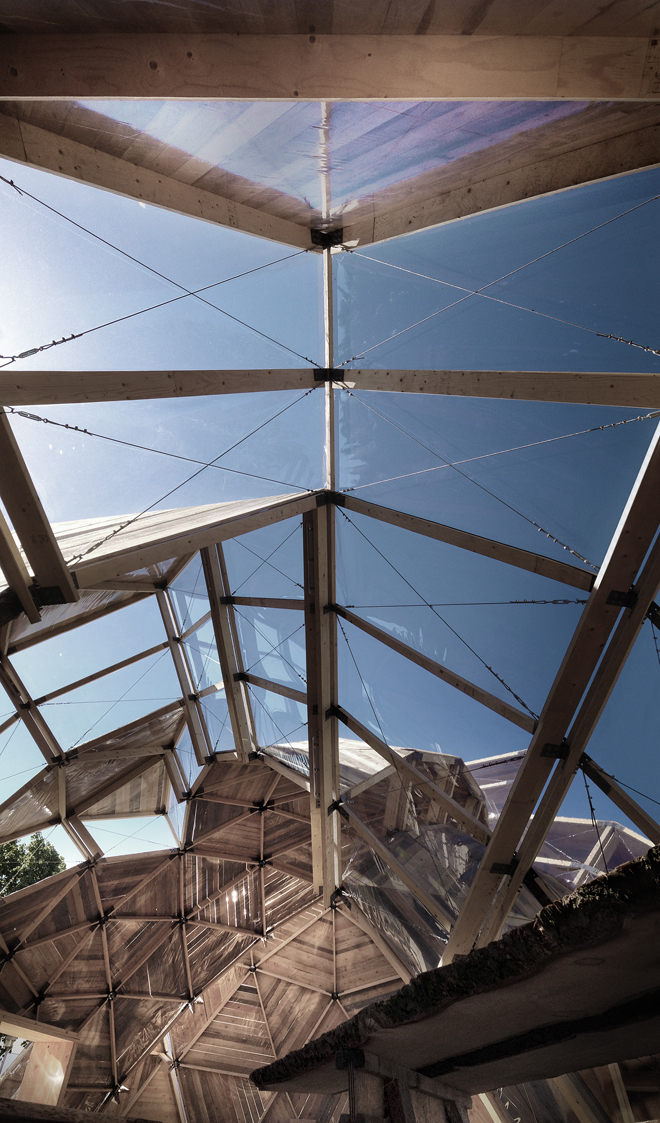 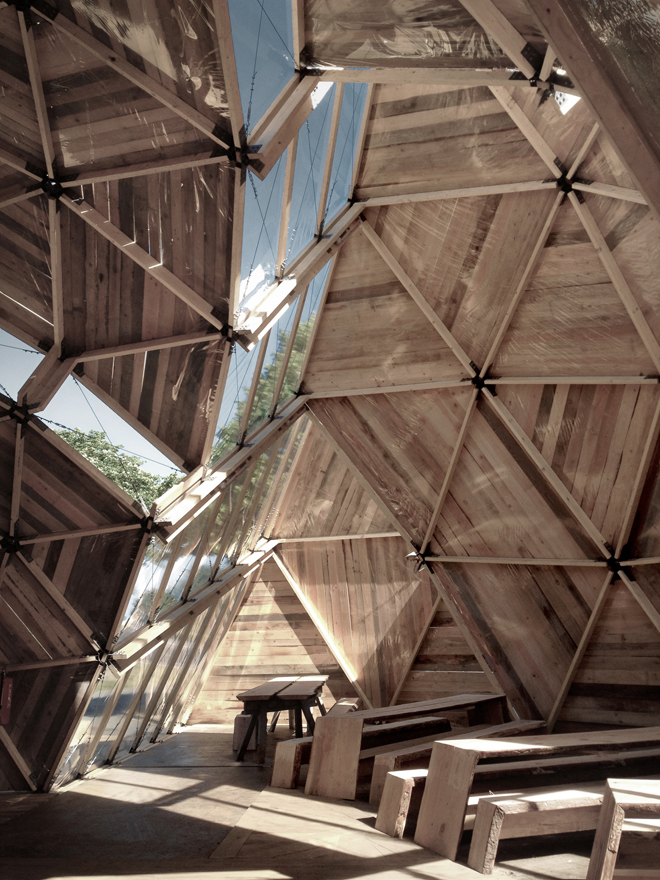 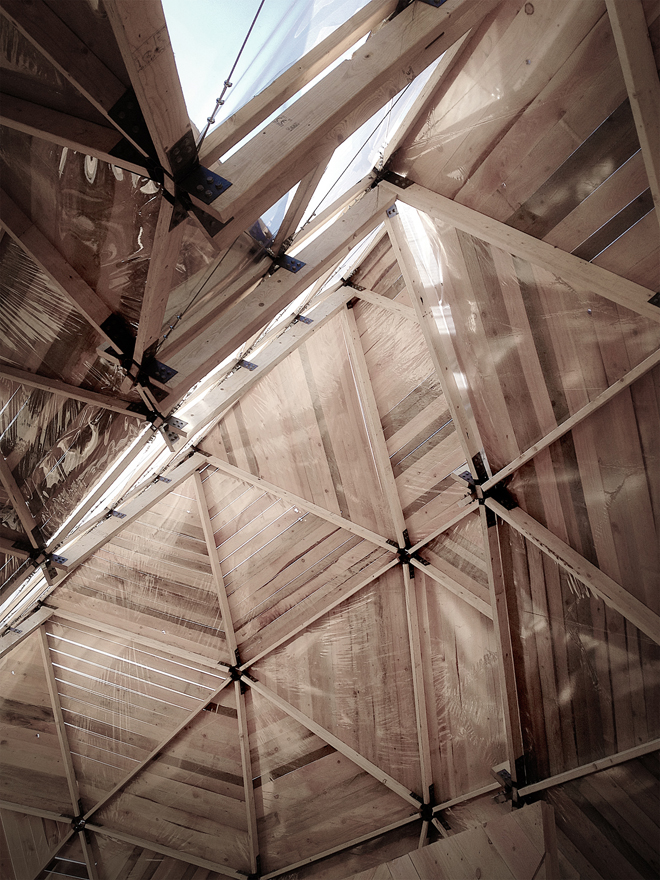 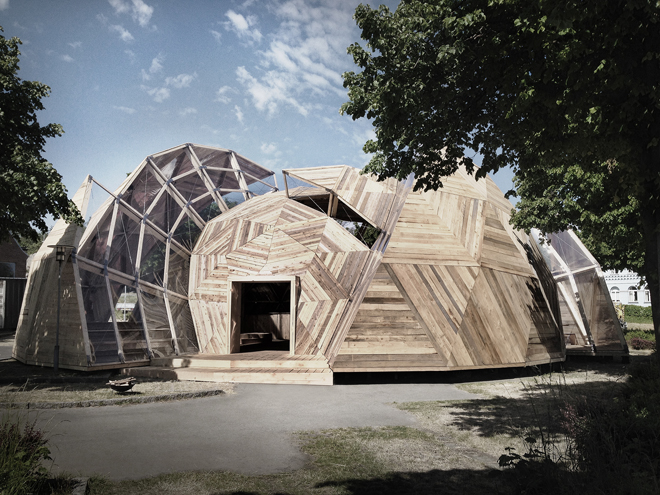 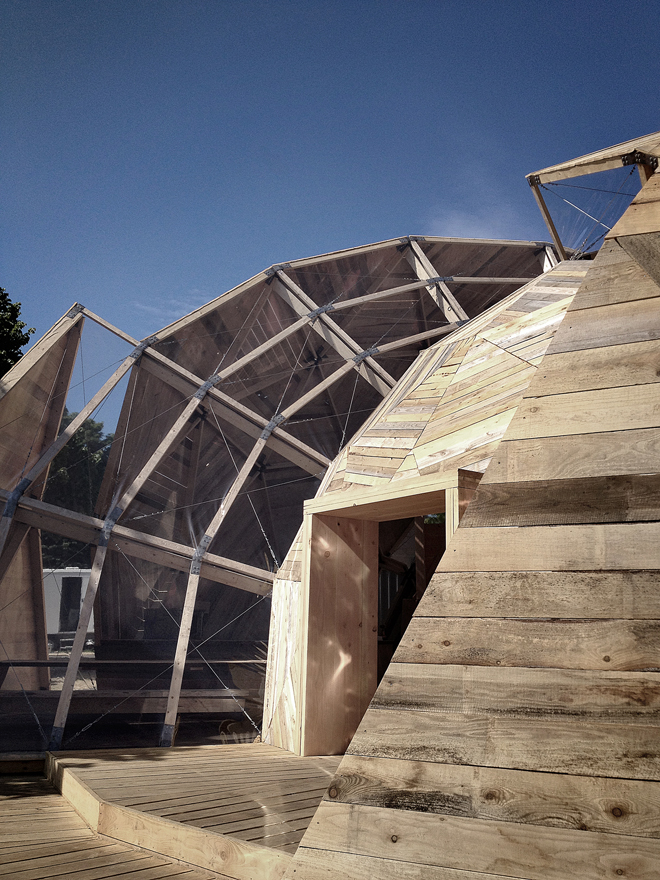 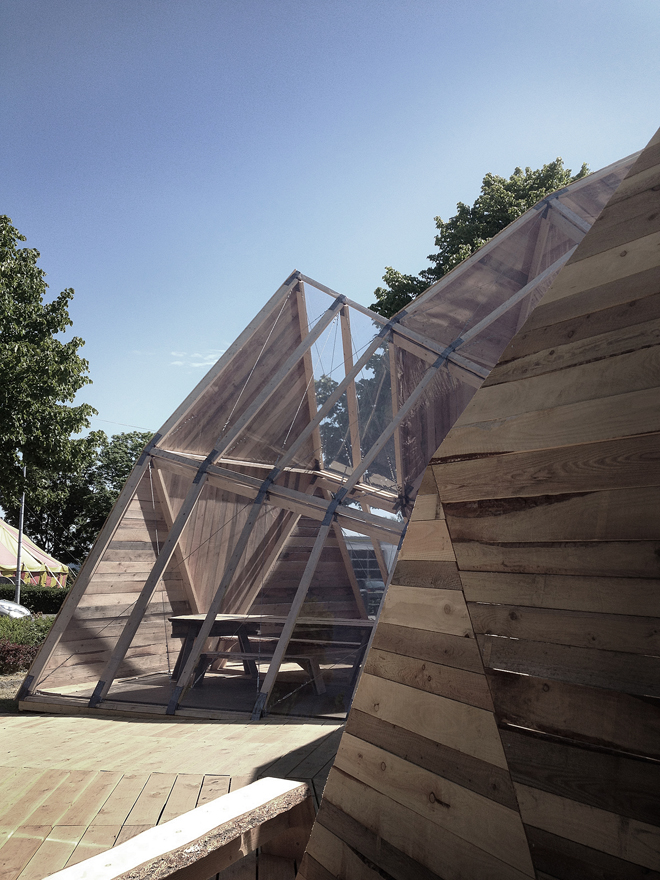 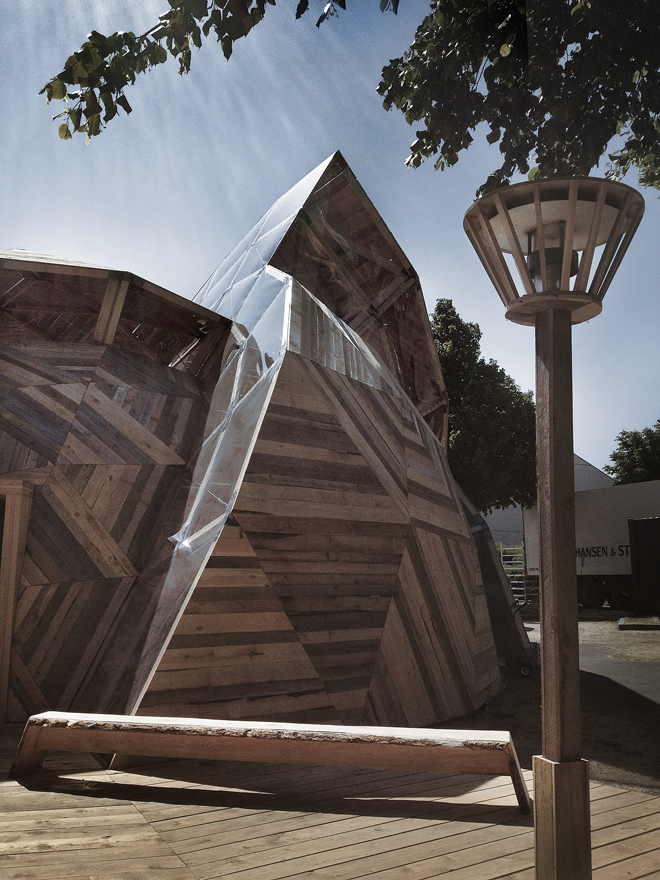 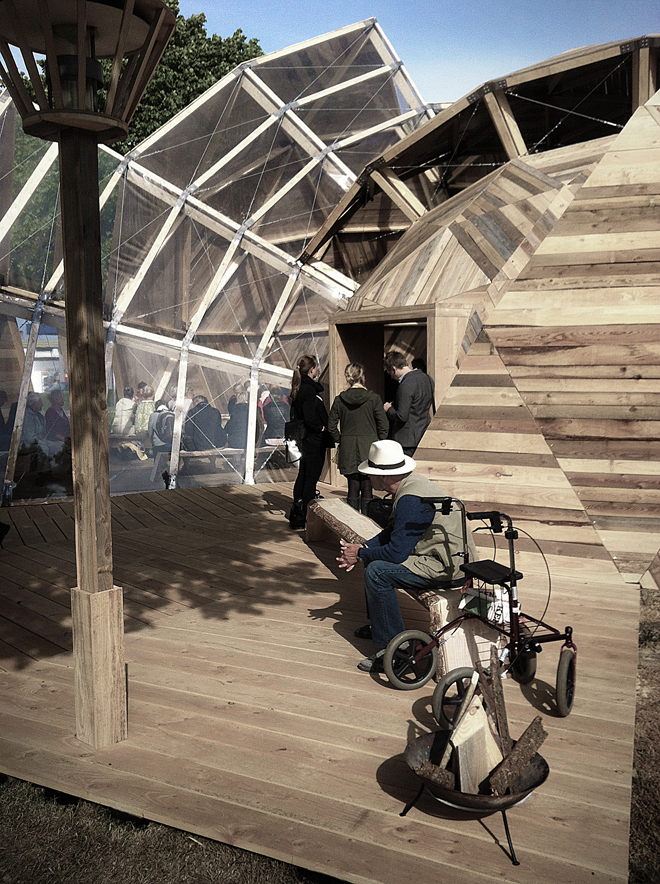 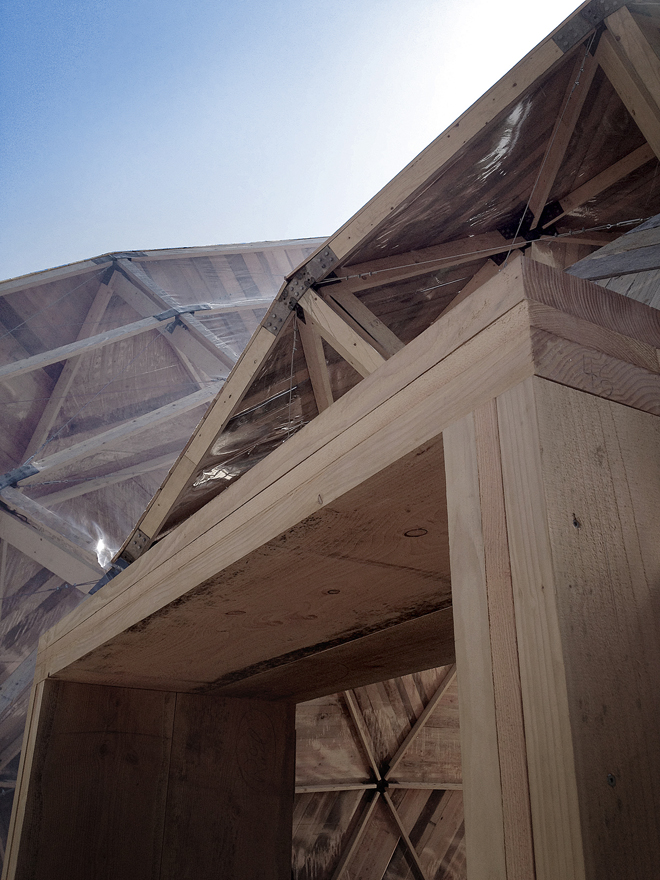 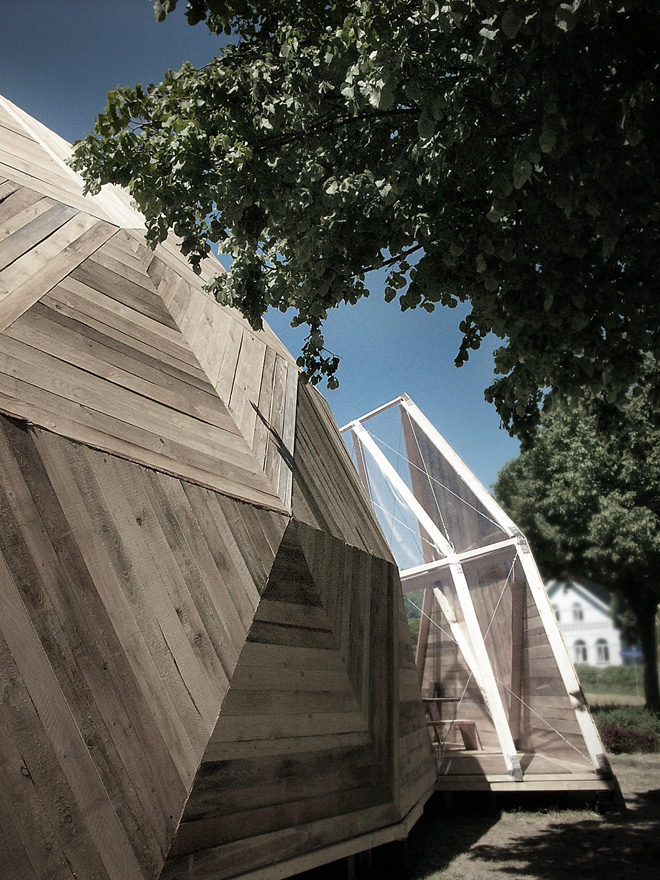